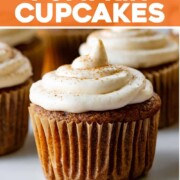 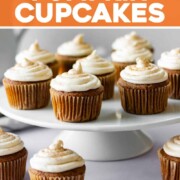 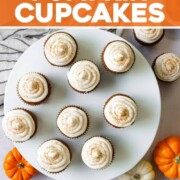 These are the most heavenly gluten-free pumpkin cupcakes topped with a simple cinnamon cream cheese frosting! These easy pumpkin cupcakes are perfectly spiced with all of the cozy fall flavors. They’re the perfect treat for a Halloween party, Thanksgiving dessert, or any fall-inspired event!

Take note that I didn't say pumpkin spice. Just pumpkin. I asked a group of friends recently how they felt about pumpkin 'spice' and if eyes could throw darts I was the dartboard. There were some strong feelings about the spice that doesn't actually have pumpkin in it.

But straight up pureed pumpkin? May a can always don its place on our shelves as a fall must-have pantry staple, especially if cupcakes are on the agenda (which they are).

But these cupcakes...heavenly. Joe (husband) highly recommends eating them with a fork. He says you'll feel like you've been transported to a schmancy restaurant to enjoy a gourmet dessert. I ate mine with my hands. Still heavenly.

But if heavenly isn't reason enough here are a few more reasons why these are the best pumpkin cupcakes:

Baking is Better with Bob's

So how do we make the perfect gluten-free pumpkin cupcake? Simple. Use Bob's Red Mill Gluten-Free 1-to-1 Baking Flour. This gluten-free flour is reliable, high quality, and makes a tasty cupcake.

Baking and Bob's Red Mill go together like fall and pumpkin cupcakes. They're just meant to be together.

How to make these tasty pumpkin cupcakes step by step

Step 3: Add the dry ingredients to the wet ingredients and whisk to combine until just incorporated.

Step 6: Bake cupcakes in a 350°F oven for 25 minutes (or until a toothpick inserted in the center of a cupcake comes out clean). Allow the cupcakes to cool before frosting.

Step 7: Make the frosting! With an electric hand mixer (or a stand mixer with a paddle attachment), cream the butter and cream cheese in a large bowl until light and fluffy, about 2 minutes.

Step 8: Add in the vanilla extract, cinnamon, and powdered sugar (just one cup at a time so you don't have a powdered sugar explosion when you turn on the mixer) and whip to combine, about 1 minute more.

Step 9: Frost the cooled cupcakes however you fancy. I used a Wilton Round Decorating Piping Tip #12 for the frosting and then dusted the tops of the frosted cupcakes with a bit of cinnamon to make them look a little more fancy pants.

Have you tried (fill in the brand name) gluten-free flour for these cupcakes?

Nope, just Bob's Red Mill Gluten-Free 1-to-1 Baking Flour. When you find a brand that just works time and time again and gives you a heavenly cupcake why try anything else?! Bob's Red Mill products are well distributed in grocery stores and through online retailers making them easily accessible for most people living in the United States. Find Bob's Red Mill products near you using their easy store locator.

Can the cream cheese frosting be frozen?

It can be frozen! If you have leftover frosting and want to save it for a later batch of cupcakes just store it in an airtight container in the freezer for up to 3 months. Transfer the frosting from the freezer to the fridge to thaw a day before you'd like to use it.

What is the difference between pumpkin puree and pumpkin pie filling?

Pureed pumpkin is just pumpkin that has been pureed without any other added ingredients. Pumpkin pie filling is pumpkin puree that has additional ingredients added to it, such as sugar, salt, and spices and is typically used for making pumpkin pie.

So how do you eat your cupcakes? Hands or fork?

Or maybe you're a face plant kinda person. I saw you eyeing that frosting. ♡

These are the most heavenly gluten-free pumpkin cupcakes topped with a simple cinnamon cream cheese frosting! These easy pumpkin cupcakes are perfectly spiced with all of the cozy fall flavors. They’re the perfect treat for a Halloween party, Thanksgiving dessert, or any fall-inspired event!

Thank you to Bob's Red Mill for sponsoring this post and for making awesome gluten-free products that everyone will love! And thank you to those of you who support the brands that allow Pass Me Some Tasty to keep cooking up the tastiness!

Disclaimer: All brand recommendations are purely my own opinion and are brands/products that I personally use and enjoy. This post may also contain affiliate links from which I may receive a small commission (without any additional costs to you). The money earned from these commissions helps me to maintain this website. Thank you for supporting Pass Me Some Tasty! 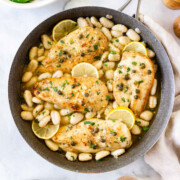 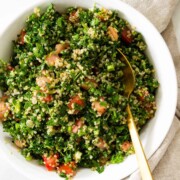 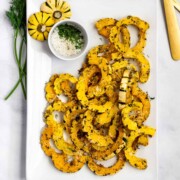 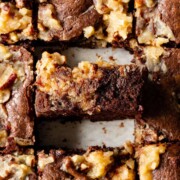 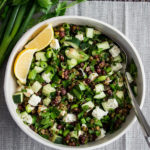 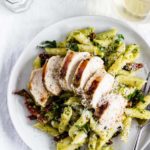